Chronogenesis gave forest many new toys, several of which have yet to impact the metagame. Some are completely neglected, with no testing at all. When Chronogenesis came out, I (like in all previous expansions) set out to try all the new forest cards. This time, I noticed a new sub theme in Chronogenesis, small buffs. In previous expansions there have few cards that are able to buff a follower or AOE buff your field (7 to be exact). Of those 7 cards there was not really any consistency between what those buffs did, some did attack, some HP, some both. In Chronogenesis however, there are 6 cards in the expansion that give your followers +1/+0, possibly hinting in a direction forest may go down in the future. Below, I have listed every Chronogenesis forest card along with my my own personal opinions on each card. 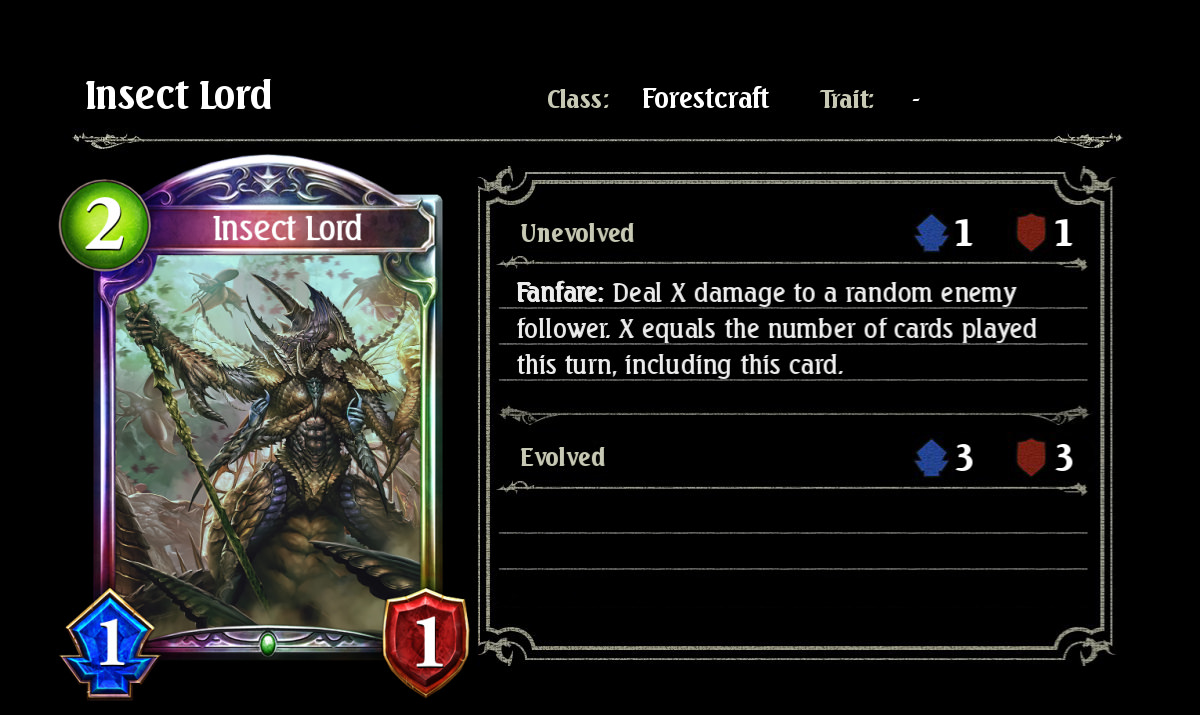 Insect Lord: Removal roach, the card -this card can do some incredible things. What makes it so powerful is its flexibility, as a small removal in the early game or as a massive board clear when used with cheap cards (such as Fairy, Fairy Wisp or a White Wolf card) and bounce spells. It also leaves behind a 1/1 body that demands either an answer or an opponent who does not respect the bounce spell. I want to take this time to say 0-cost King Elephants are pretty crazy, by itself it can end a game. In combination with insect lord(s) however it can turn a sticky situation into a very powerful board flip. 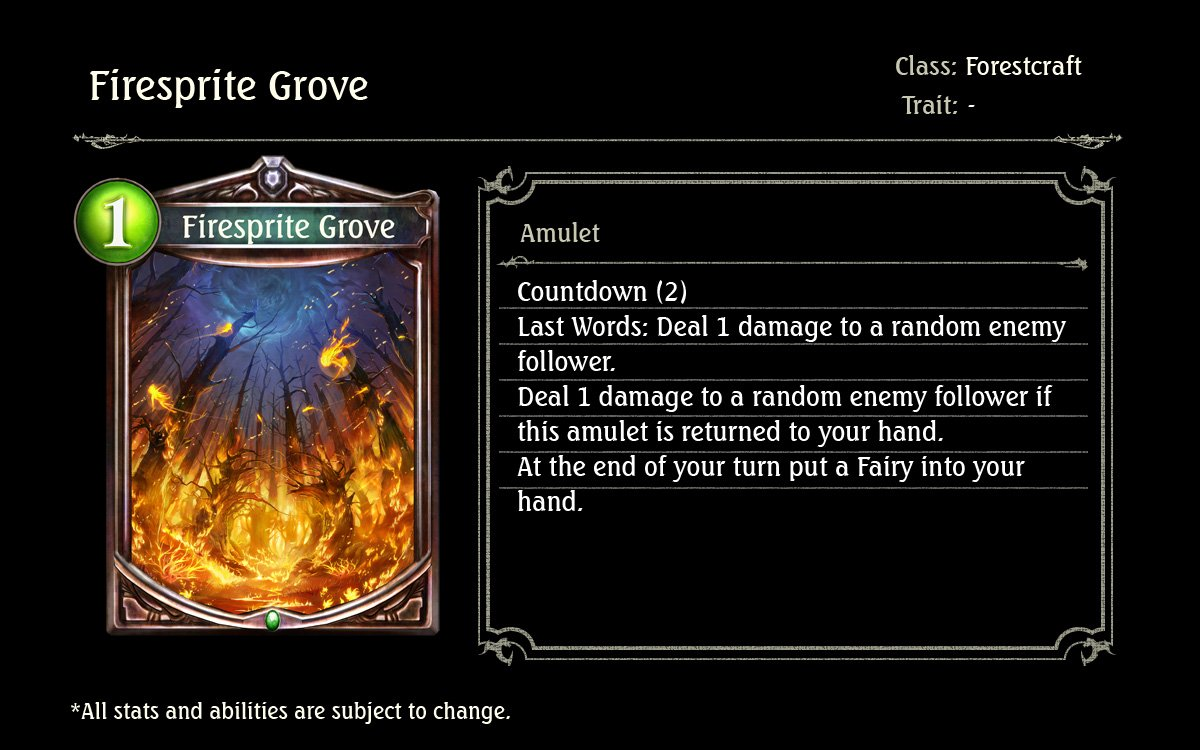 Firesprite Grove: Have you seen this animated? Incredible art for an incredible card. Firesprite Grove is some kind of mix between Elf Child May and Fairy Circle. However, it’s much slower than both of them. It supplies you with a steady stream of fairies, and my favorite thing about it is that it’s something you can play on turn 1. The 1 damage ping is also quite powerful, being able to kill off a weak/injured follower or setting you up for some efficient trades (especially with Wood of Brambles). For OTK Roach you can play this instead of 1 drop followers so that your goblin mage can have a 100% roach pull rate. 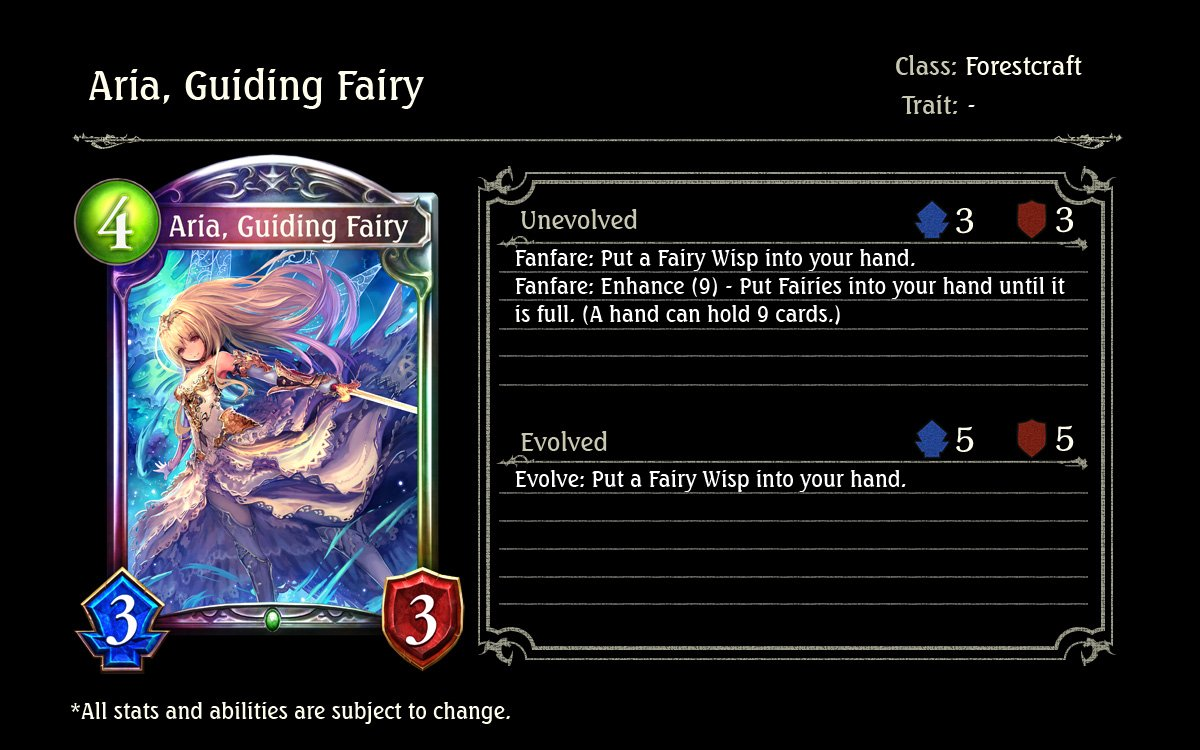 Aria, Guiding Fairy: A Legendary upgrade to Elven Princess Mage. EPM has always been a strong card for enabling powerful combo turns with her 0 cost fairies, but as a consequence felt bad to play without an evo point.

Aria does not have that issue, because she gives you one fairy wisp on fanfare. Additionally, Aria’s wisps are an INSANE upgrade to 0-cost fairies. They ended up being so powerful in combination with Rhinoceroach that Aria was limited to 1 copy per deck in Unlimited just a few weeks after release. She isn’t nearly as busted in Rotation, without Rhinoceroach, but but is still good at keeping your hand full and triggering combo effects such as Maahes and Beetle Warrior. 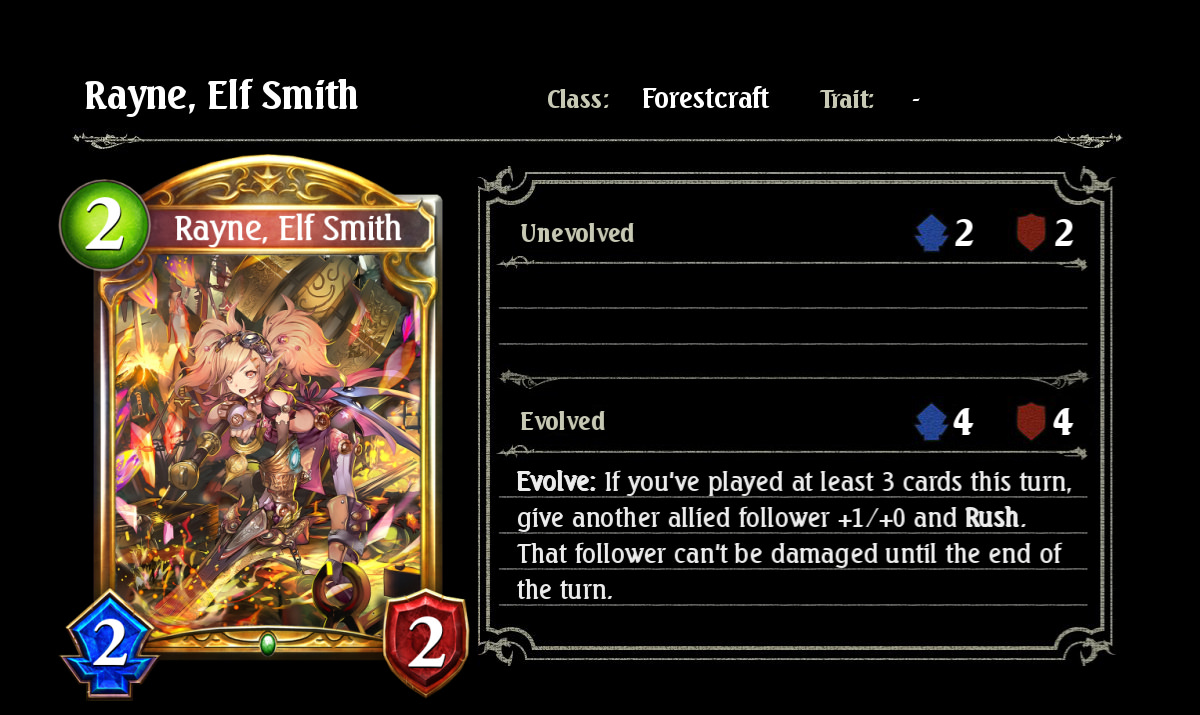 Rayne, Elf Smith: A 2PP 2/2 and in my opinion, one of the more powerful ones available. However, Forest already has an abundance of powerful 2/2/2’s and not enough space for them all. It’s hard enough to pick between Lily, Fita, Leaf Man, and Rayne,and that’s not even including neutrals, other 2-drop followers, and spells.

Rayne is a powerful card that can swing a board hard, almost comparable to Old Man Levi. I am curious whether she will see more play after Lily rotates out. 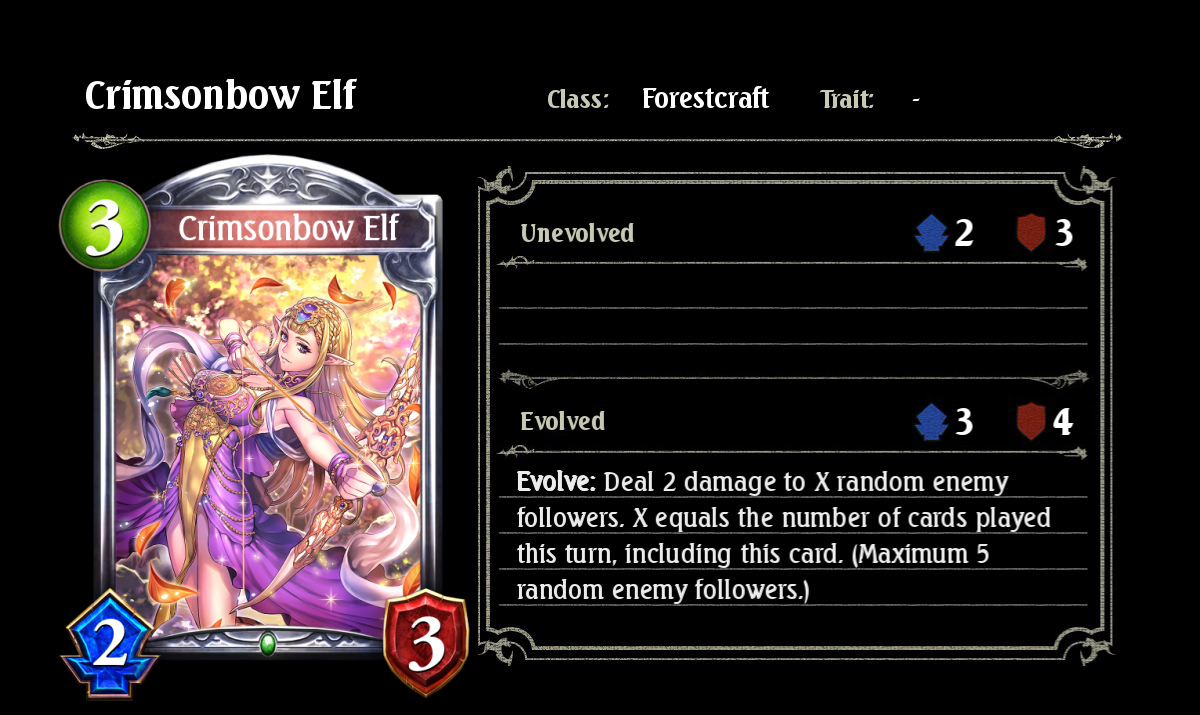 Crimsonbow Elf: Crimsonbow Elf is pretty strong in some matchups like Forest, Sword and Shadow. What this card can do against those classes should honestly be illegal, wiping a board and leaving behind a halfway reasonable body. However, against decks with big followers like Dragon or Haven, this card is rarely anything more than just a 3PP 2/3.

One of Crimsonbow Elf’s biggest downside is that she costs an Evolve. When your deck doesn’t have space for too many of these mass AOE’s, Cassiopeia just tends to be better, activating on fanfare and maintains your hand size instead of reducing it. Another strike against Crimsonbow is that she needs to be played in the same turn as other cards if you want her effect, this is not always possible and even when it is can be a hindrance if other cards in your deck care about your own hand size. 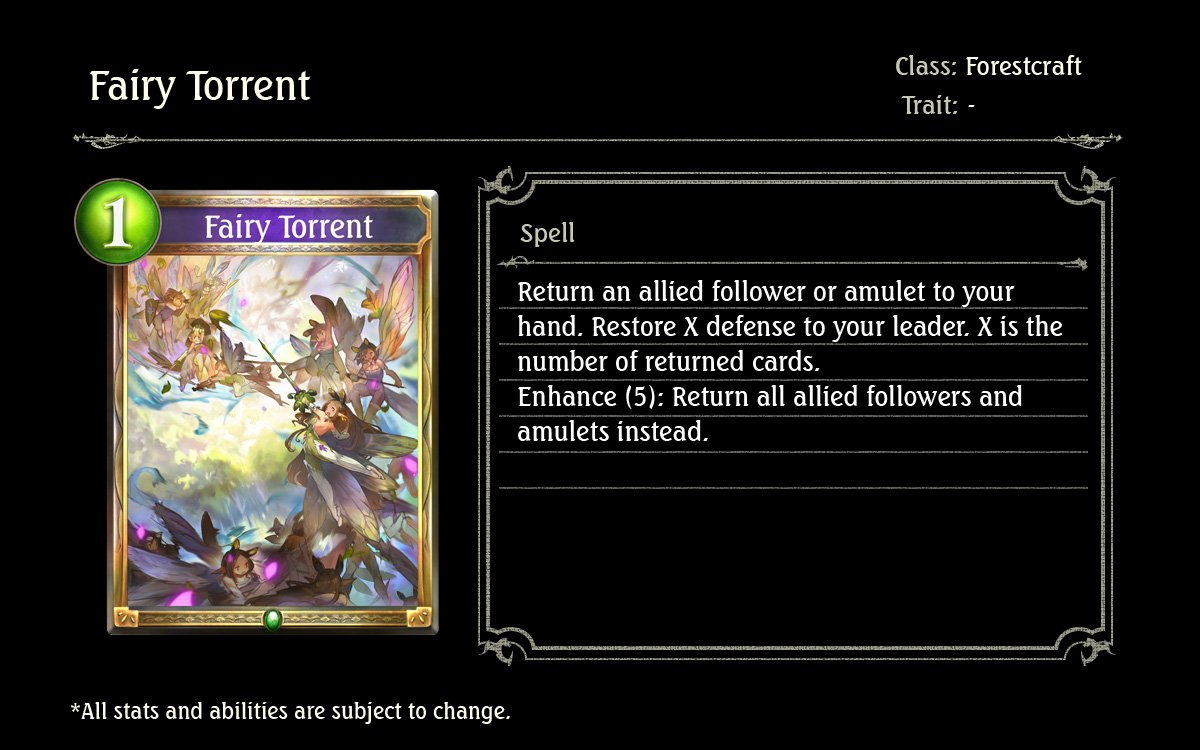 Fairy Torrent: After playing with this card I learned one thing. Bounce effects are strong. Period. Any bounce spell effectively says “1PP, draw another copy of the best card you currently have. *Insert random bonus effect here.*” The thing is, we forest players have been spoiled by incredible cards like Nature’s Guidance, Airbound Barrage, and Ancient Elf. In comparison, Fairy Torrent just seems unappealing.

One criticism that Fairy Torrent often gets is that its enhance effect is too expensive. Yes, ancient elf did it for 3 AND gave you stats, but the thing is, you don’t HAVE to use the card for its mass bounce. Think of that as just a bonus (that can sometimes be clunky to play).

The HP swing can be massive in a close game, the resources you rebuy from a mass bounce are huge, and with forest’s powerful cheap amulets (Im looking at you Spring Green Protection), you will often have something you can keep on board to bounce.

(Now I know what your thinking, 8/10? I know, I gave this card a VERY ambitious rating. Before I decided to call this writeup finished I wanted to make sure HSK PancakeReaper (one of our most trusted forest mains) agreed with my evaluations. But When it came to Fairy Torrent he profoundly disagreed, and I understand where he is coming from. There are times when Fairy Torrents enhance effect will screw you up. There are times where the HP you get from torrent won’t matter and there are times where a bounce effect just will not get the job done. And in his opinion, those chances of inconsistency makes it not worth running when there are plenty of other cards out there that can do the same job much better. I am personally excited to see what this card may do down the line but I want to leave you wonderful readers with both mine and pancakes ratings.) 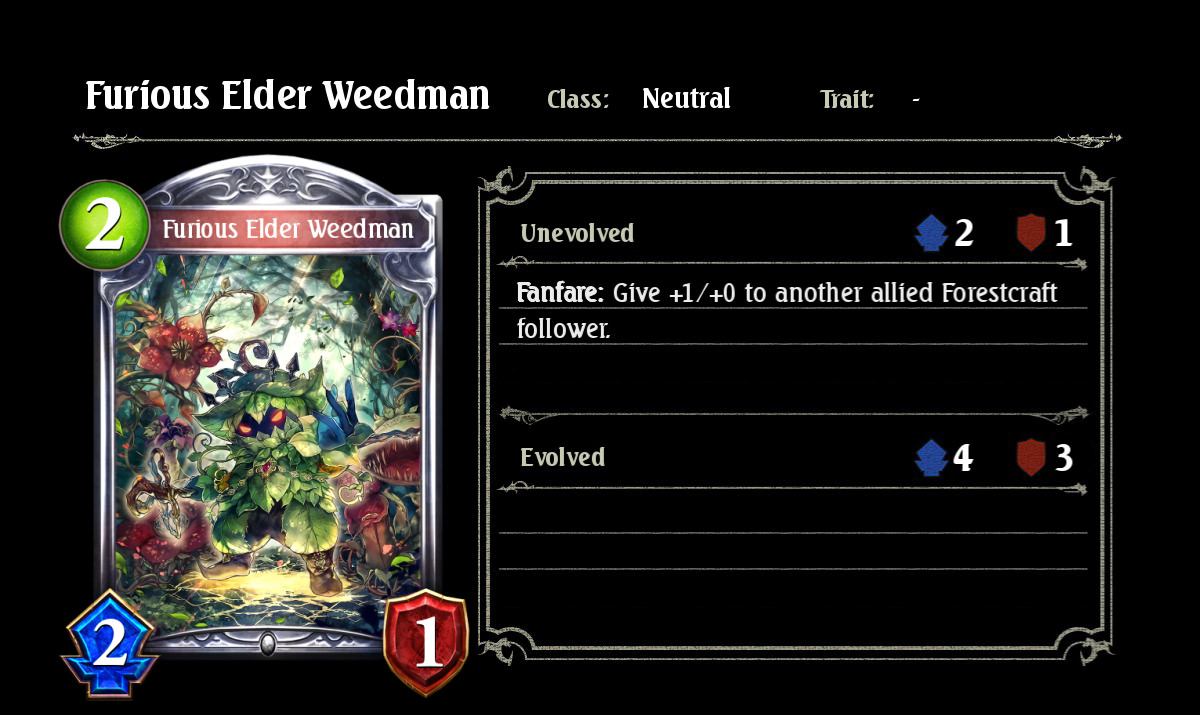 Furious Elder Weedman: The Forest version of Palace Fencer. He’s a cheap follower that can help push 1 damage. However, he’s 2PP and that makes him much harder to combo with cards like Elf Song and bounce effects. When I first saw this card, I thought maybe it could be pretty good, but I dont think Forest has the same tools sword had that made Palace Fencer good ( at least at the moment). 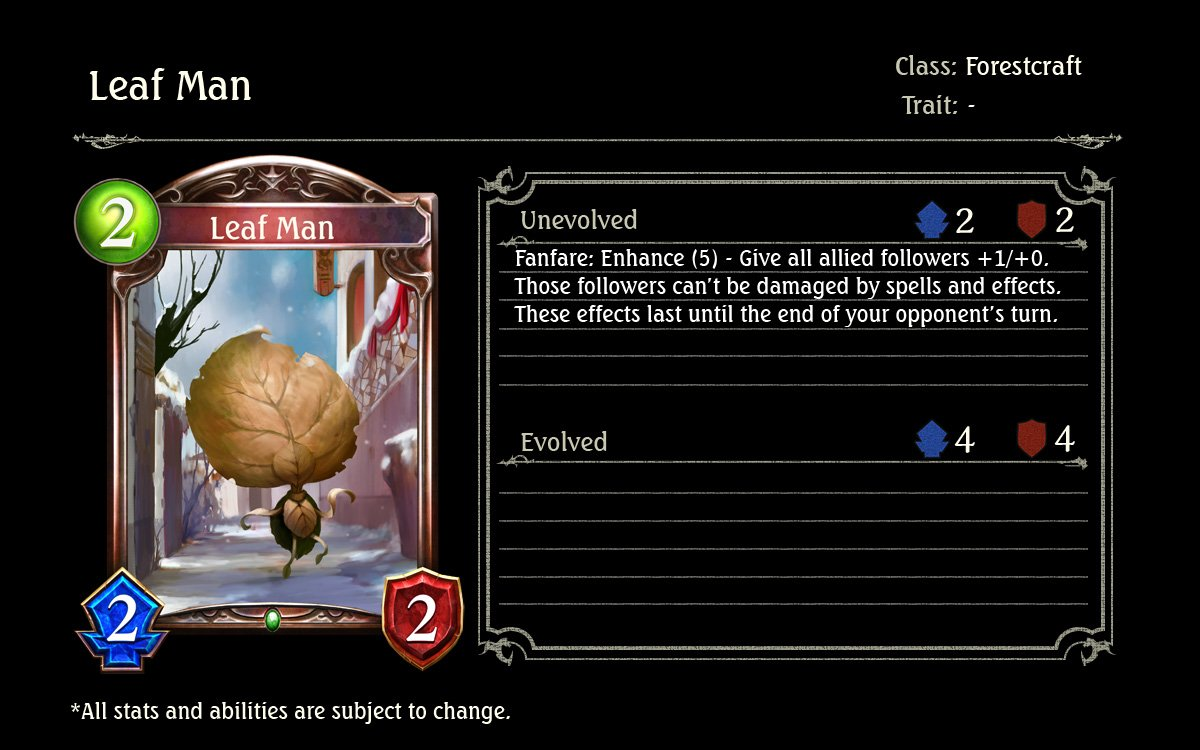 Leaf Man: Oh look! Another 2PP 2/2! Where were my notes on Rayne again…? Leaf man is the love child of  Elf Girl Liza and Blessed Fairy Dancer, having both of their effects stapled onto a 5PP Enhance effect. The thing is 5PP is expensive for an effect that is intended to protect and buff your board, it’s hard to do that if you spent all of your PP for the turn developing the enhanced Leaf Man instead of other followers. Thankfully forest has a lot of tools to get mileage out of its followers between things like Wood of Brambles and Elf Song. Because of this its not unreasonable to have powerful Leaf Man turns.
One thing to note is that both Blessed Fairy Dancer and Elf Girl Liza’s effects are valued at 2PP.  Unfortunately this card is not as flexible as Liza and Fairy Dancer. It is worth noting however that giving followers protection from spells and effects is an incredibly powerful effect and that alone may bring leaf man into some powerful decks. 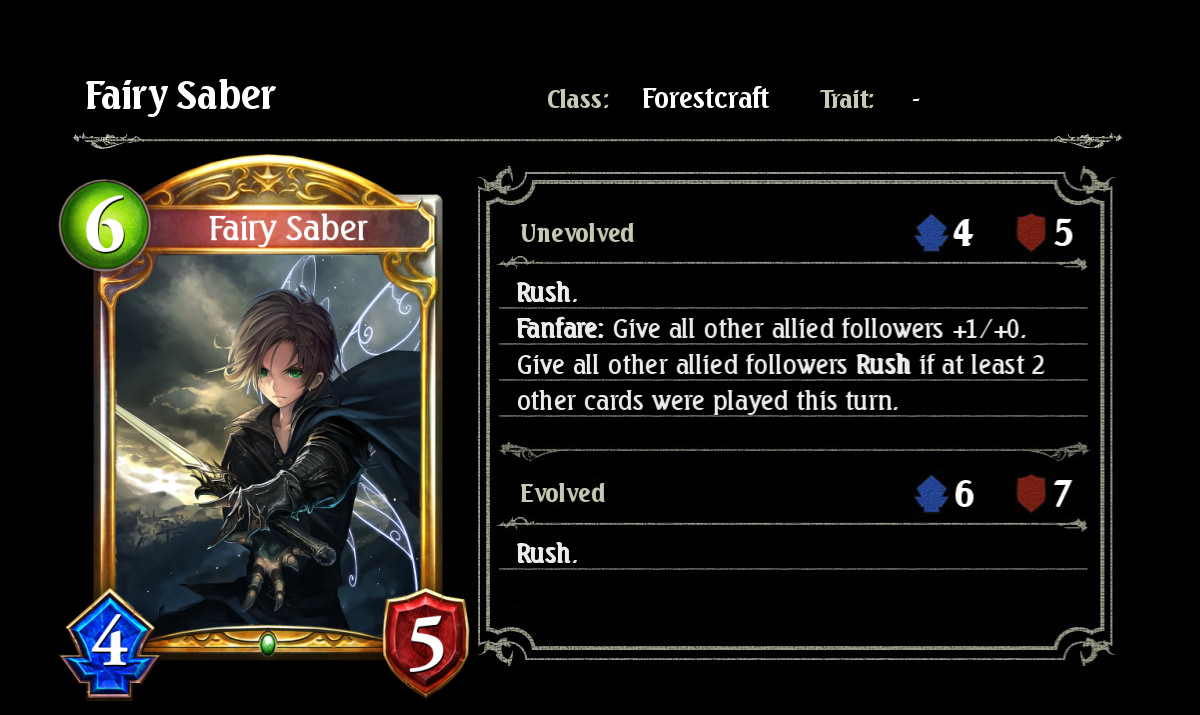 Fairy Saber: I’ve heard people call this card Forest Eachtar, but I think that’s far too generous. Fairy Saber has proved useful or even game-winning a few times, but more often than not I would rather just have any other high-end forest card. Since forest can’t develop sticky boards like shadow, he usually just buffs one or two fairies and feels underwhelming.
6/10 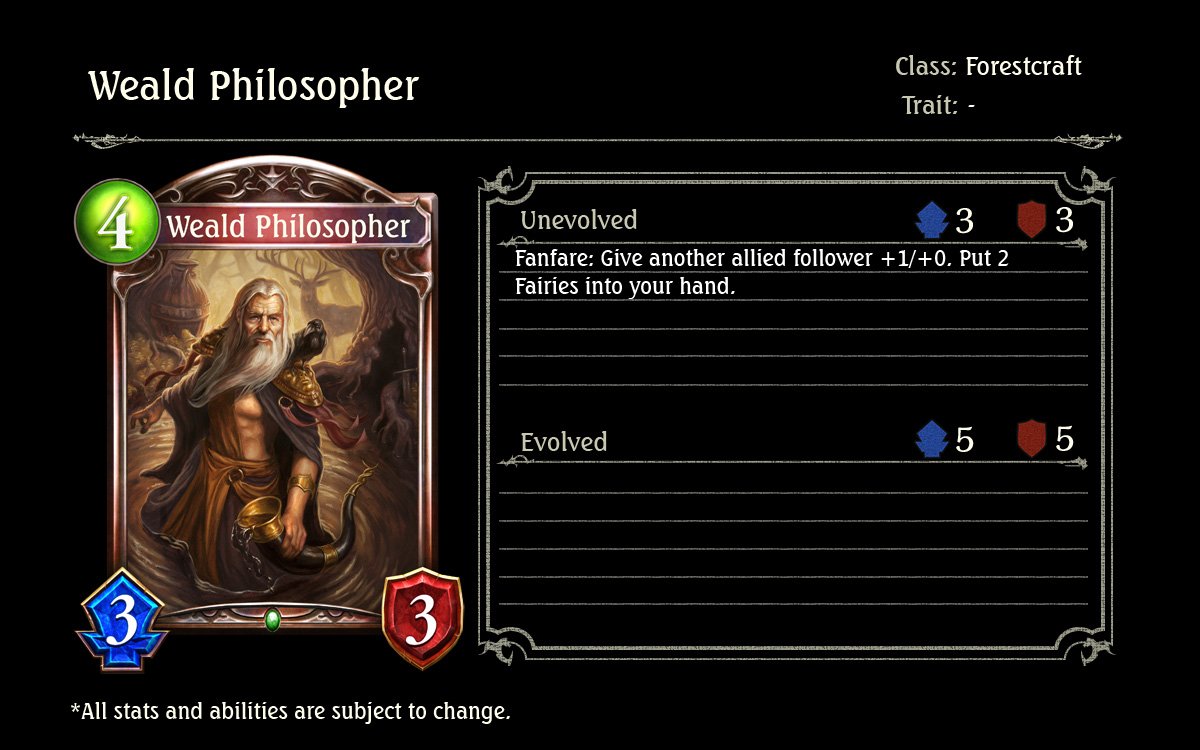 Weald Philosopher: This was a strange card to put in the same set as Aria as they both perform similarly on turn 4.  The main difference between the two is how they instantly impact the board. Aria allows you to hold or play your 0 costs while the Philosopher tells one of your fairies to beat just a little harder. One thing I’ve noticed about forest is it has a few 4PP 3/3’s, most of which see no or only fringe play. I find it hard to imagine the Philosopher being able to compete with similar cards like Aria, Ariana, and Fairy Driver. 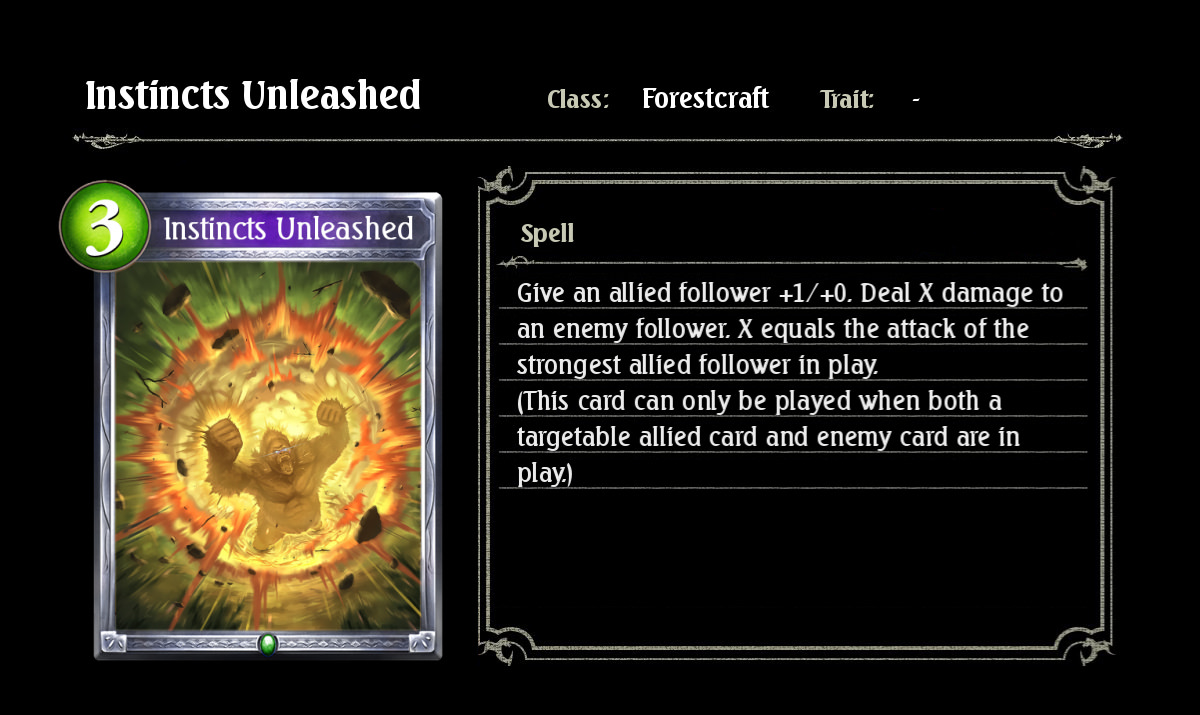 Instincts Unleashed: I want to like this card, but there just are not enough cards right now to make it worthwhile. If you want this to clear a strong follower, you need a strong follower yourself, and forest is not really known for having big followers. The main thing is that the card is so expensive for what it actually does and is so linear that it just feels clunky to use. Maybe there will be more cards down the line that can make use of this effect, however at the moment the only card that Instincts Unleashed feels remotely close to being playable with is Fita the Gentle Elf and to put it bluntly, she doesn’t reward you enough to be playing such an awkward card. 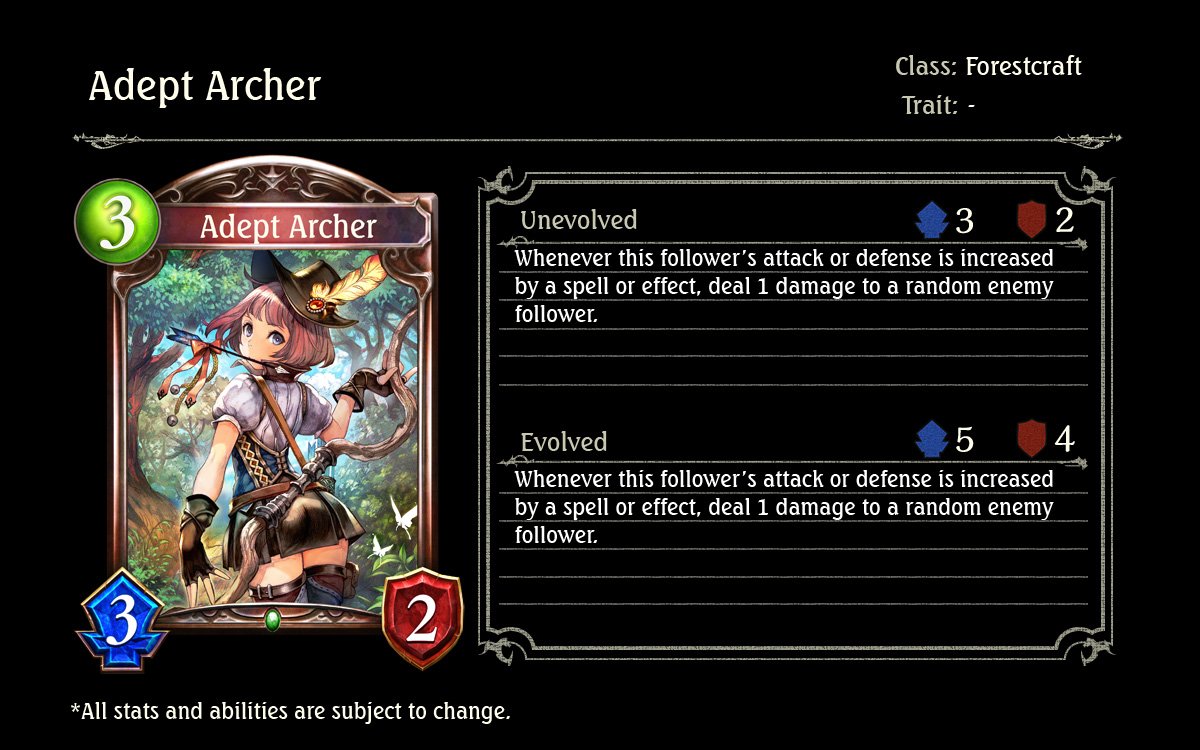 Adept Archer: So I look at this and the first thing I think is “3PP 3/2. I like those; they beat down hard (if they live(things do not often live in Shadowverse)).” So then I read the effect and I think “oh cool, I can use this to clear stuff too.” And then I use the card, and it just does not work like that.

Most of the time you play it you can’t even trigger her. Other times you will get her buff trigger but your opponent won’t have anything on board. So you have to jump through all these hoops for….. 1 random damage? Oh boy that will help me deal with that 4/3 on the other side of the board.

I don’t know, I think Forest Spirit has a much more relevant effect and that card never saw play.
3/10

I wanted to leave those who read this far with something they could take to the ladder, so I present to you the deck that inspired this write up. While I dont think its by any means an incredible deck I had a lot of fun testing and tweaking it. The deck went through lots of changes since I first started with it, initially having many more of the buffers that came in Chronogenesis as well as Adept Archers. In the end I found that there was not enough reward to be going so deep on a synergy and much of it did not make the final list. I did however find that Fita is an incredible card and rewards you pretty heavily for building around her. Due to this I would not discredit the buff Forest archetype and am curious to see what future expansions will bring to the table.