With Dawnbreak Nightedge just around the corner I figured it would only be appropriate to make a top 5 list of my favorite cards in the set. I would like to point out that these are the cards that I am most excited about playing, I don’t necessarily think these are the strongest cards in the set. Dawnbreak Nightedge came out the gates announcing the choose mechanic and let me say, not only is this mechanic exciting, it is also very powerful. It allows for so many more decisions to be made in a game and adds an extra layer of mindgames to Shadowverse. I can’t wait to play with it and without further ado, here are the 5 cards I am most excited to play with in Daybreak Nightedge. 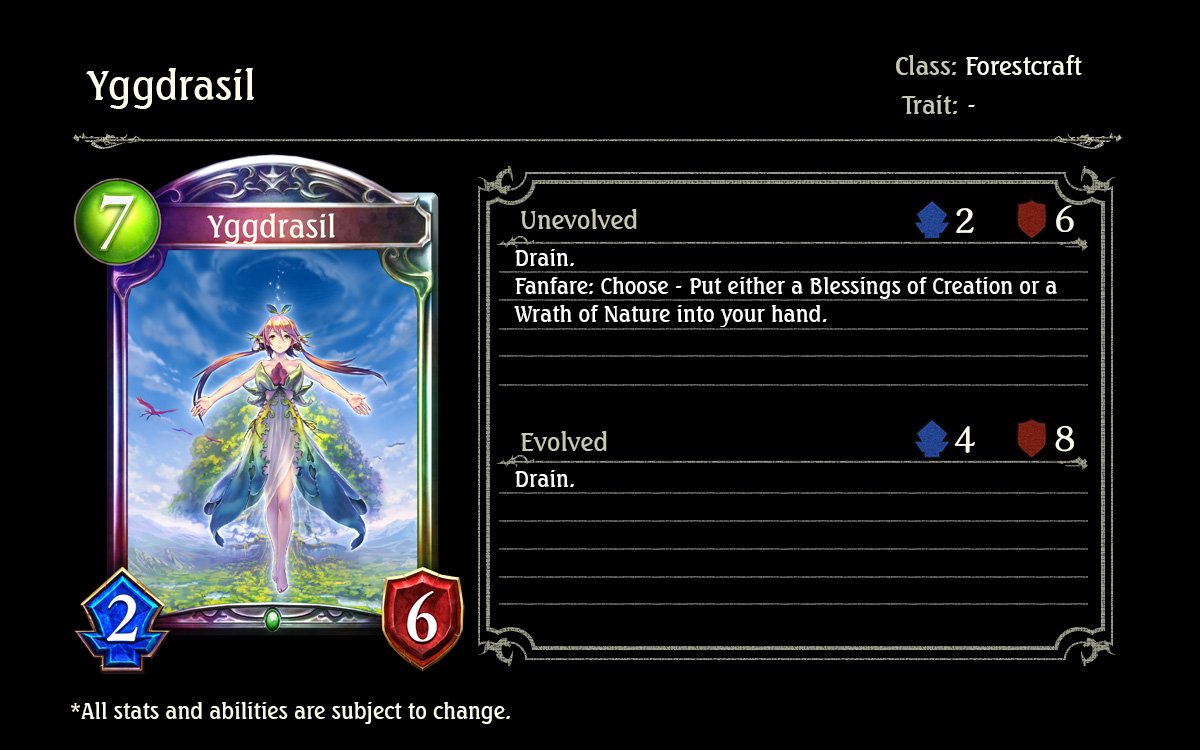 1: Yggdrasil: I love Forest so It’s no surprise that the card I am most excited for is the new Forest Legendary. There are so many things about this card to love. Forest is pretty great at stalling a game with powerful options like Cassiopeia and Aerin. The drain on Yggdrasil helps forest stall that much better, but the real draw to Yggdrasil is the spells she gives you. On one half you have Blessing of Creation, a 0 cost draw 2 that also makes it easier to hit your “if you cast x cards” triggers. The other half is a 0PP buff spell that gives a follower you control +1/0 and rush, but here’s the kicker (I hope you magic players got that) if you play Wrath of Nature for 4 you give your whole board +1/0 and storm. Yggdrasil just does so much good for Forest’s kit and I can’t wait until I get to play with the card (and search for it with Grasshopper Conductor)

2: Dragoncleaver Roy: I legitimately think this is one of the best ramp cards in the game at the moment. This card is most comparable to 3PP Aiela, it has the same stat line but with 2 major differences. 1) You have to pay for the ramp effect on Dragonlife Blade. 2) The card is not a totally dead draw in the late game thanks to Dragonstrife Blade. Considering Dragon is losing Breath of the Salamander and Draconic Fervor with the Rotation of ROB this card really pulls weight by being a follower in the early game, A 5PP Ramp spell that lets you pay for it at your own leisure and a Removal spell. The card even has incredibly relevant trinket text since Dragonstrife Blade hits Dragon cards extra hard. Both a flavor win and a good way to give the card extra oomph in what tends to be a big follower matchup. 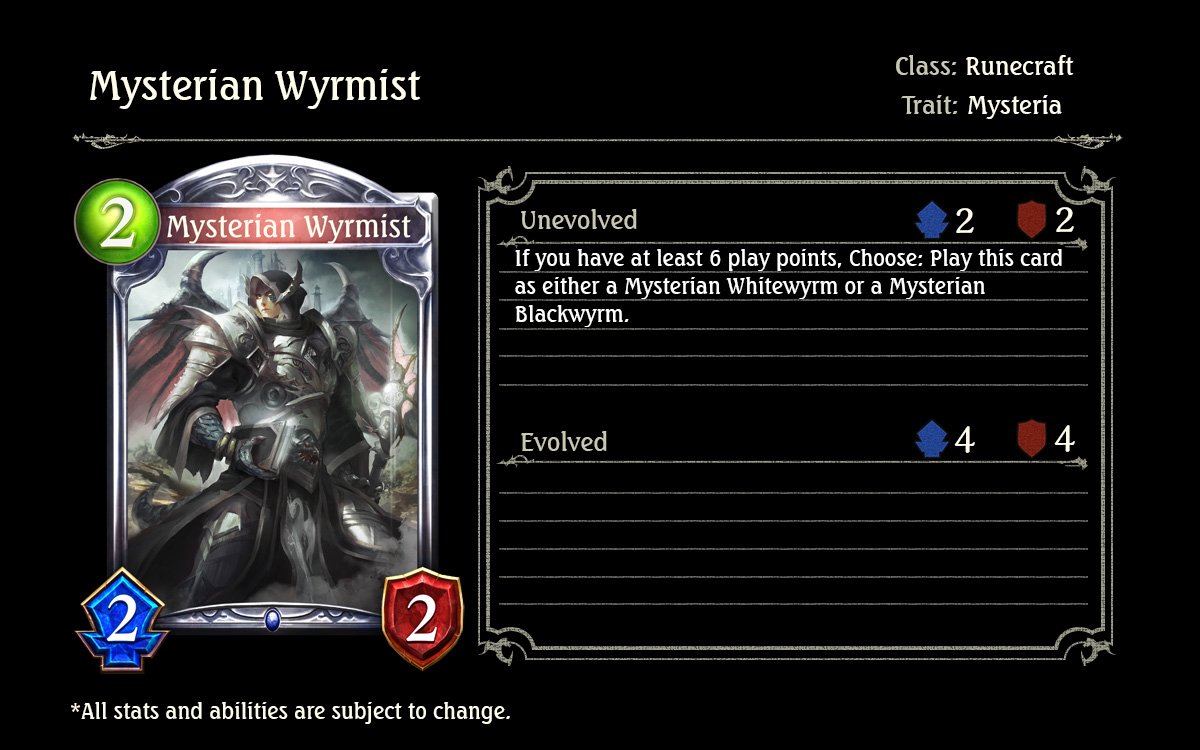 3: Mysterian Wyrmist: Before we even pretend Mysterian Wyrmist has any effects lets just look at the stats of all 3 sides. 2PP 2/2, 6PP 5/6, 6PP 6/5. The Sheer fact that you can flips The Wyrmist’s stats on 6 is already very powerful and that is on top of it having premium stats on every side of the card. Now that we got that out of the way let’s take a look at its effect. On one half you are given a Mysterian Missile that does 1 extra damage to face and allows for all your other Mysterian spells to deal 1 extra damage to face too. On the other side your given a Mysterian Circle and give all of your mysterian spells “draw a card”. So let’s take this from the top. Premium stats. A choice between Mysterian Circle and Mysterian Missile. A great bonus to all of your mysterian spells. Plus this thing just has nice art. This thing is just VALUE in caps lock. 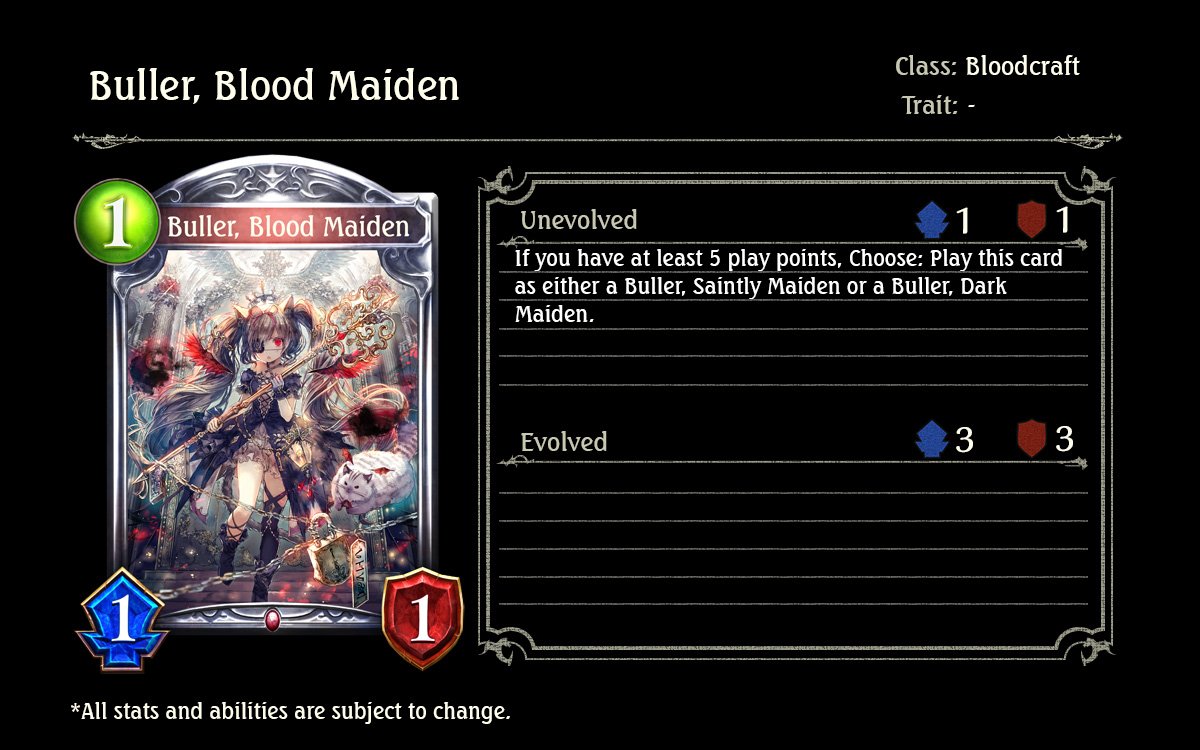 4: Buller, Blood Maiden: This card is so incredibly flexible it’s wild. In the early game you can play it as a 1PP 1/1 to get in some chip damage or to trade with a 1HP follower. In the midgame you can use her as a decent 5PP 3/5 ward with some added life gain, or you can play her as a 5PP 4/4 that gives your board +1/0. This card is just good in so many different versions of blood. It allows for a more controlling blood deck to contest the board in the early game in 1/1 mode. It gives a more aggressive blood the option to slow the game down with its ward mode. With all of the bat support coming out in Dawnbreak Nightedge this will just give that deck more reach. The important thing is that while Buller may not be the best follower on curve she makes up for it with flexible and impactful options. 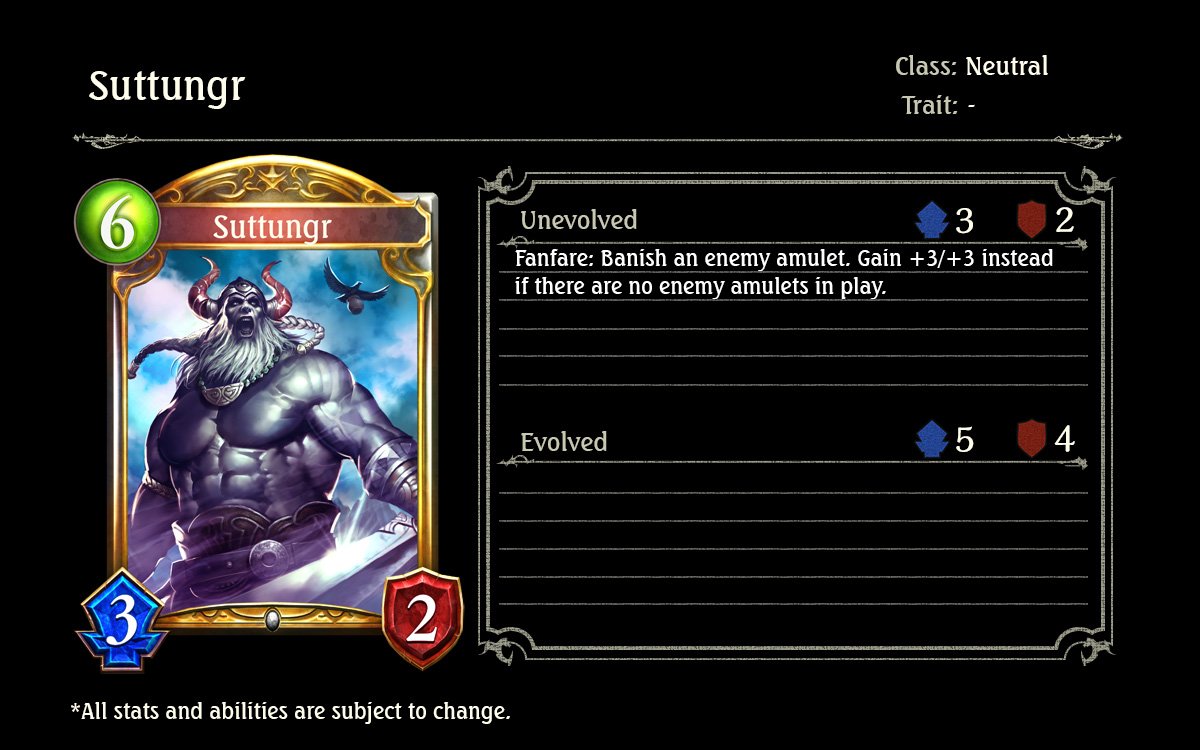 5: Suttungr: There are alot of things I think this card does right.I want to start by saying when Cygames announced the Bahamut change they did so with the intention to make amulets better. Dawnbreak Nightedge has what looks to me like quite a few strong amulets and one thing worth noting is the more decks that play slow amulets the harder it is to get punished for taking your turn developing a slow amulet. Now let’s talk about Suttungr. This guy is one of the few neutral amulet removals in rotation, along with Fall From Grace and Burley Axe Wielder. I think Suttungr is a great example of how a tech card should work. When he has an amulet to hit he does it while leaving behind a reasonable body. When he doesn’t have a good target he becomes a beefy 6PP 6/5. I feel like a lot of the time card games have incredibly punishing tech cards that are too strong when they work and not strong enough when they don’t. Suttungr just does a good job at not being embarrassing to play for tempo. This is where Odin fell short. He was able to leave behind an okay body but it was okay at best and unless you were getting good value off of his banish effect he just wasn’t enough. I hope Suttungr ends up being a strong option for all classes and believe he has the potential to be just that.


When Dawnbreak drops it will herald the death of Rise of Bahamut. Many powerful cards will be leaving, leaving a void to be filled. Dawnbreak Nightedge has a ton of very interesting (and very powerful) cards and honestly this article barely scratches the surface of how excited I am to play with the expansion. If I missed any cards your excited about let me know in the comments! Have fun with the new expansion and get those sweet sweet pack pulls.